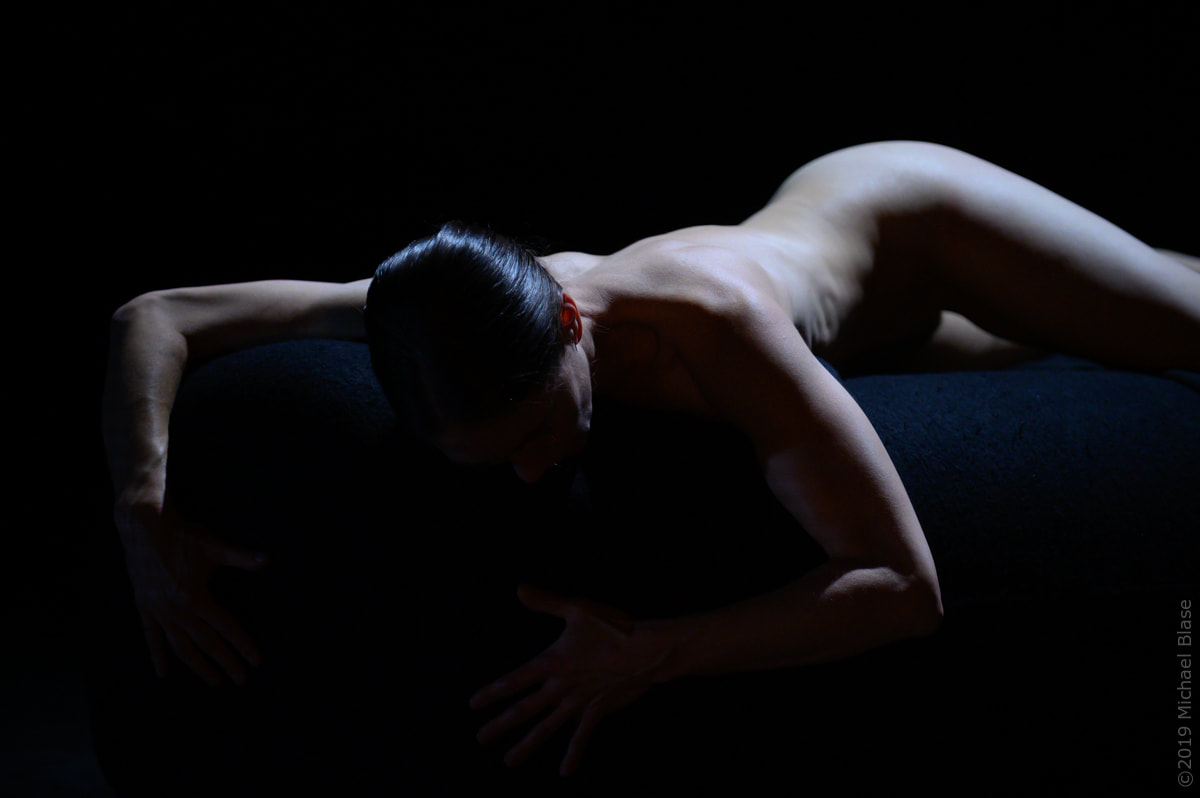 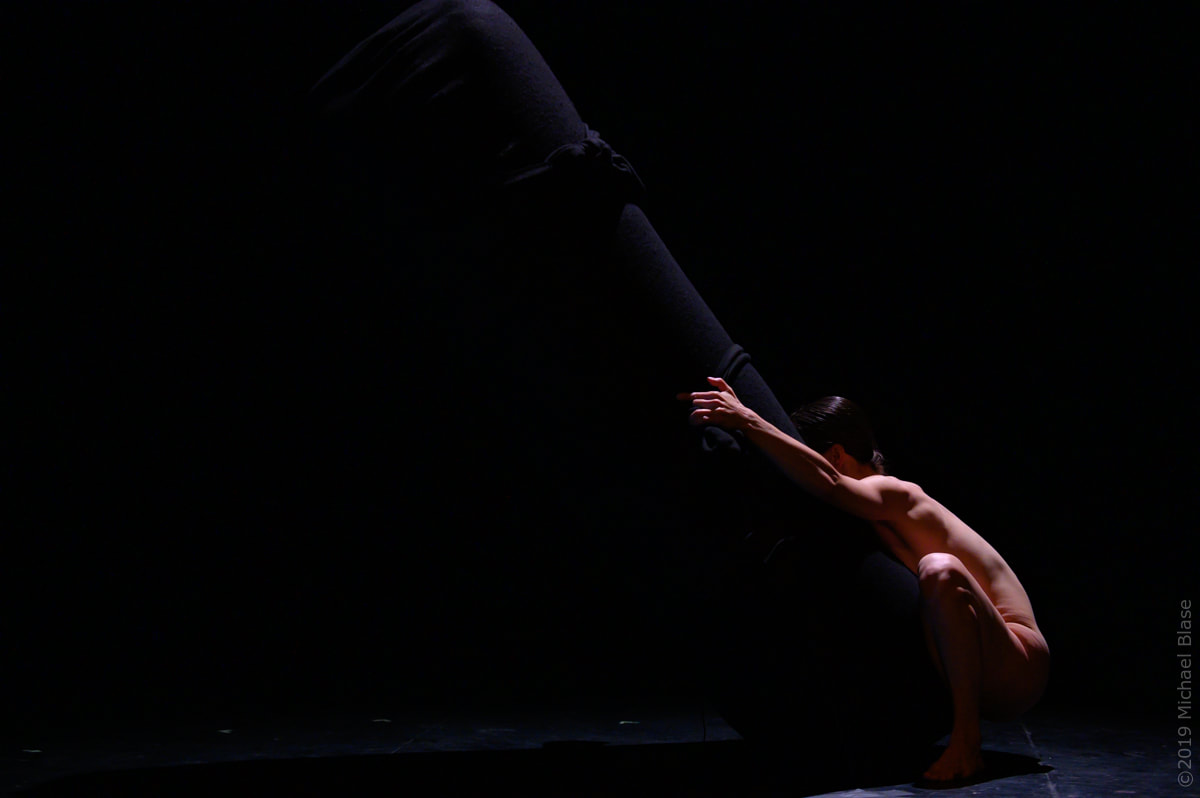 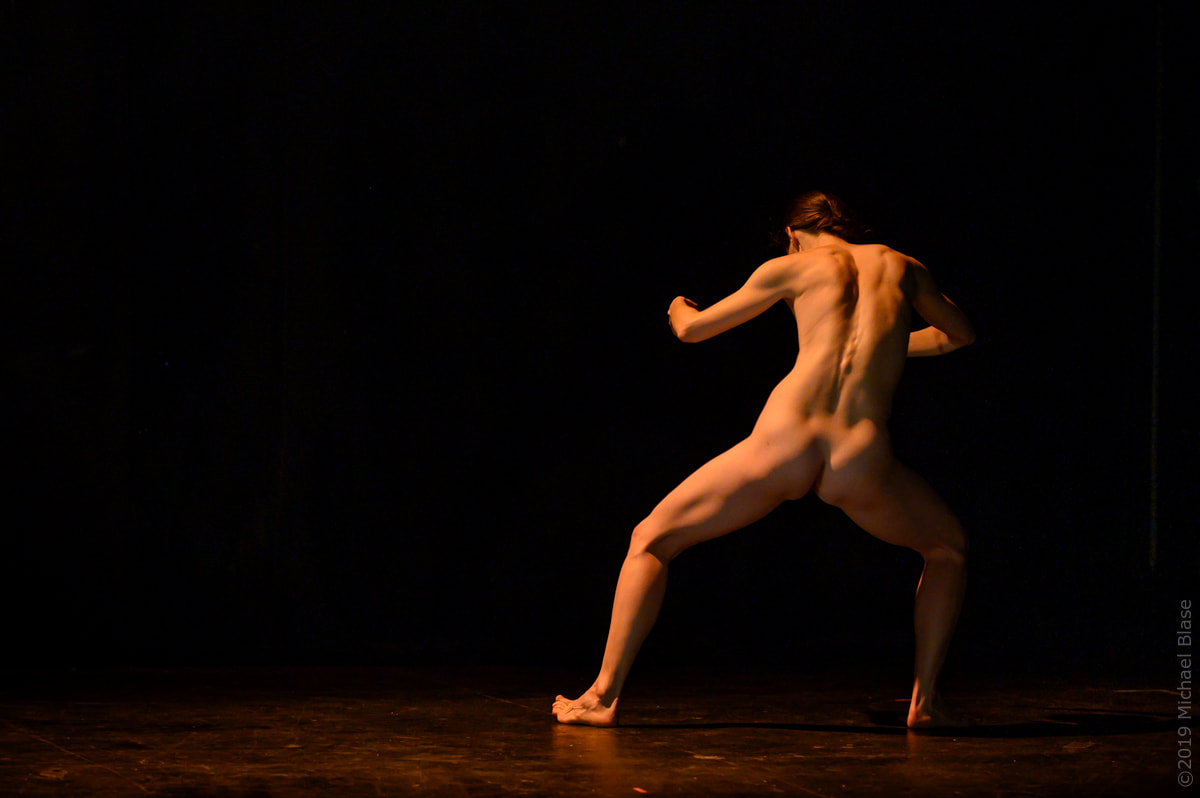 ... While Butoh is a Japanese art form, it lacks the strict formal traditions of Kabuki or Noh theatre. Instead it has a spirit, available to any culture that has survived destruction.  New York, which constantly destroys and rebuilds itself, is an ideal venue.
​Melissa Lohman’s opening solo “Vessel and Void” was a New Yorker’s take on the Beginning – when a light shone in the darkness, and became flesh.  In an empty black space with a spotlight above, she lay white and prone on  what looked like a thick black duffel bag, over which she humped and crawled until she was seated on the floor and it was standing on its end like a thick black phallus.  Rising to her feet, showing mostly her back and sides, she made much of the body’s bilateral symmetry. The two columns of her back rose and fell independently like climbers on Jacob’s Ladder, to the sound of a single column of air, something like a Japanese bamboo flute. Her minimal script repeated the polarity of something and nothing – asking “what is this?” Toward the end her movements became more expansive and playful, and the score switched to what sounded like wind chimes – again columns of air but with a greater incidence of chance and play.  This was a creation story without a fall, a dance of mischief and joy. Bowing at the end, she patted her duffel like a fellow performer. Thanks, bro.

The three solo performances I saw all had similarities: slow, controlled, almost trancelike movements (being moved rather than consciously moving), isolation of body parts and profound internal discipline, providing a powerful movement meditation. They were riveting, strange, unsettling and powerful.

Melissa Lohman’s “Vessel and Void,” which she conceived and performed in the nude, her only prop a gigantic phallic object covered in black cloth, which she lay on, embraced, clung to, straddled, rode like a horse, upended to vertical, walked around and lay next to on the stage floor. She began in stillness, her long lanky body stretched out across the “divan,” her back to the audience, like Goya’s Naked Maja in reverse. There is a slight buzz of sound. She moved ever so slowly through space, stretching, arching, engaging her torso, raising her arms overhead and to the side, sitting on her heels. Most of the time she performed with her back to the audience, except when she turned sideways in motionless silhouette or walked back and forth across the stage. She repeated the word “Nothing,” stressing all ways to say it. In the program, she is quoted, “The presence of darkness, pushing, dynamic. A vessel overturned contains the void. I cannot know all that I contain.”